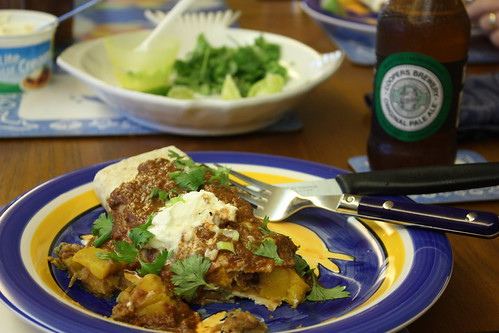 There's really not much more I can say about this dish then to say... go out and make this, right now!

1. To make the sauce, put the chiles, coriander seeds, sesame seeds, almonds, peppercorns and cloves in a mortar and pestle and crush. (I used my little whizzy chopper thing since I don't have a mortar and pestle). Tip into a skillet and dry-fry for a minute or so until lightly charred.

2. In a separate pan, fry the onion, garlic and cocoa in a little oil for 2 minutes.

3. Add the tomatoes and bring to a boil, then add the dry-fried spices, the cinnamon, sugar and stock and cook for 25 minutes. Transfer to a blender and whiz until smooth. Fold in the chocolate.

4. Preheat the oven to 400C. Coat the squash in oil and roast for 40 minutes until soft.

5. Put the squash in a bowl, add the refried beans, cilantro and red chile and stir well to mix.

6. Divide the mixture between the tortillas, roll up and put into a baking dish. Cover and cook in the oven for about 12 minutes; until warmed through.

7. To serve, put two tortillas on each plate and spoon over some of the sauce (it's pretty heady so not too much!). Serve with some sour cream, lime wedges and cilantro.

I highly recommend it with a decent pale ale as well. I even have plenty of sauce for leftovers! Yumyumyumyumyum
Collapse