It's funny how sometimes yarn can work in unexpected and magical ways. The second skien of Araucania Ranco was such an impulse buy, but it was such a pleasure knitting my Saltos from it, and it was such a -pretty- skien of yarn that I just couldn't help but snatch it up at the crafts expo.
I'm not sure why, in hindsight, but for some reason I got into my head that it was a lot paler then it turned out to be, I think because of how the skien was wrapped with a lot of the light cream and white parts facing towards the outside I thought that it would be a predominantly white sock with hints of bright colors. But of course that's not how it turned out, was so much more saturated even when wound up into a ball and of course it knit up into this beautiful array of colors into a knitted fabric.

I went from this: 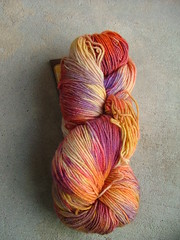 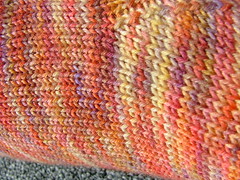 Now at first the colors bothered me, because as I said, for some silly notion I had it in my head that it was going to be a much paler a fabric... but then, I got over it.. And then something rather magical happened.


I brought the yarn with me on the recent trip my mum, my sister and my two nieces made a couple weeks ago. It was my traveling project since I knew we were going to be spending many long days in the car. We drove up to Yeppoon which is right on the very southern end of the Great Barrier Reef. The reef is one of those places that I've always wanted to go, always always, and I was to put it lightly, thrilled by this trip.
I knew I would be getting into the water, even if it was the middle of winter. Even if the water was barely 20 degrees C. Even if it had been gray and threatening to rain the day before.
I got in and spent a good hour snorkeling around the reef just off Great Keppel Island. It was an incredible experience hampered only slightly by the cold and the fact that my eyesight, even underwater through the goggles was still pretty poor without my glasses. But still; the coral, the fish, the sharks, the beautiful blue of the ocean made it a downright amazing experience.

But it was only later, as I was working some more on my socks... I had already turned the heel by this time and was working on the foot of the sock, aka, more then halfway done... that I noticed this particular piece of magic (or serendipity, if you will)
I was meditating on the colors that I had seen under the water. For the most part sadly it was rather unimpressive. It was shocking to be frankly honest just how badly some of the bleaching had gotten in places. It was rather a lot like this. Only underwater, great expanses of dead coral with the living tucked in amongst. But for the most part, it was thriving still. And these rich pinks and reds took centre stage. And then suddenly, seemingly out of no where. You would get a splash of the brightest of pinks, yellow and a brilliant blue/purple; the signs of new growth in coral.
All of these colors were in this yarn I was working on. This sock that I was knitting.

But that wasn't the end of the magic, oh no. My sock was even taking the -shape- of coral. 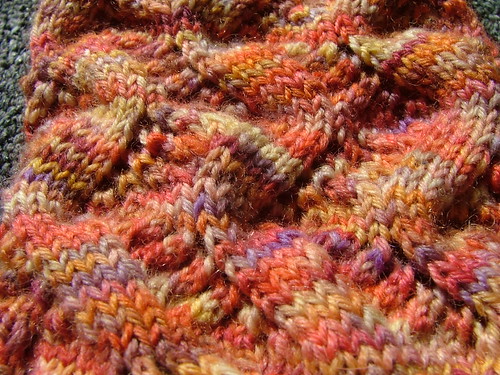 The bumps and ridges of coral on top of coral, the "friendly" soft, wavy kind and the knobbly brain and stag corals. 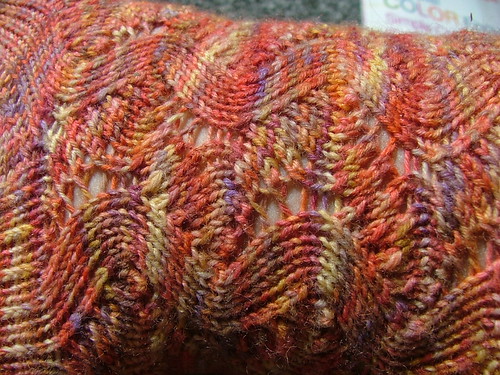 It was taking on the ripple of the water as it flowed over and around the uneven surface with so many hiding holes for all walks of life to live in. 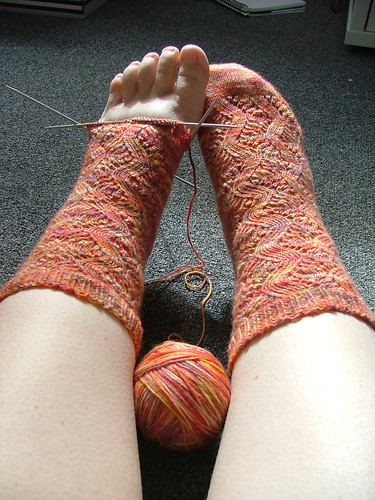 These socks had -become- my memory of this experience. These are my Great Barrier Reef socks. The first time I visited that famous reef (but hopefully not the last, that snorkel only whetted my appetite to get up further north and get into the more established parts of the reef rather then just the tail end up it!)
I fell in love with the socks all over again, and now I couldn't imagine them any other color; any other pattern then what they ended up as.

Can't life be funny in that way sometimes?
I finished up these socks tonight while watching the opening of the Olympic games. I wanted to hurry and finish up the pair to set that memory of my vacation aside and move eagerly on to my next project; my next memory in progress. I'll get photos of the fully completed pair tomorrow when I get some light!

And now, I need to go pass out, for realz.