One of the better things about this nanny job is that it gives me plenty of time to knit during the day, when the girls go off to play on their own on the swing set, or to build sand castles, or play in the backyard, I've been adding on to my Branching Out scarf which had been on the needles for several months now. Happily it's gotten long enough where I'm calling it done and cast off on Friday with the girls watching (they've asked me to teach them how to knit, this will be score two and three for Kate after teaching Is!!) 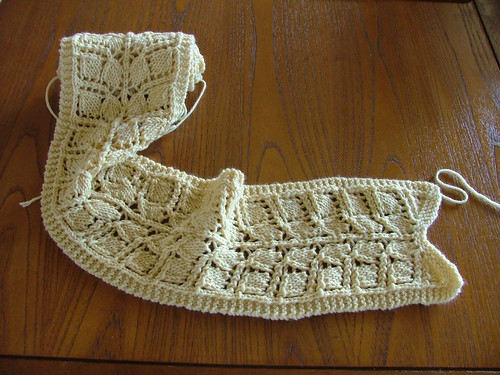 Pretty, no? It's not -quite- finished yet. I still need to weave in my ends and then it needs a good wash and a block to open up the lace pattern. But I'll do that after the holidays when there's less people in the house (and most importantly no babies!)
It's knit with a VERY yummy Debbie Bliss Cashmerino baby wool, a blend of merino and cashmere, so this is a very soft scarf. I have no idea who it will be for just yet. I kiiinda made it originally with the idea of giving it to my mum (thus the buttery yellow colour) but really, my mum never wears scarfs and as she "doesn't live in winter anymore" she'd never really get an oportunity to even THINK about wearing it.
I might give it to Olena for a Christmas present since she admired it, but it's not -really- her colours.
Should I possibly give it to my brother's long-time girlfriend? She might like it, and I'm sure there'd be plenty of use for it in Madison... 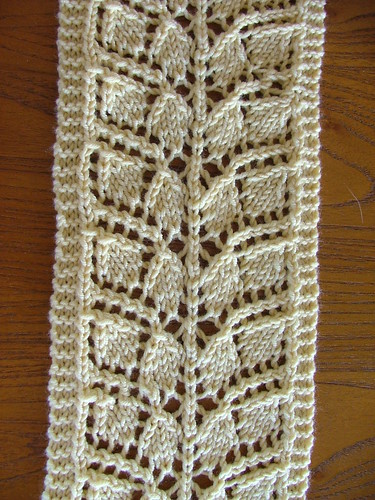 The other project I have to share I made a couple weeks ago. My cousin Joanne has always been crazy about frogs! Anything froggy makes her happy. Last year she had a gorgeous daughter, baby Anna (who has only gotten more charming and beautiful each time I see her!) Two weeks ago was Anna's first birthday and Jo had invited the whole family together to celebrate a Naming Ceremony for baby.
I found this pattern through Ravelry (THANK YOU RAVELRY I LOVE YOU!) And knew it would be perfect. I didn't manage to get photos of it before I wrapped it up, but Jo brought it up to Emerald this weekend and I was able to take it on a little photoshoot.

I just so happened to have odds and ends of Noro left over in green shades, so there was much fun in arranging the colour changes. 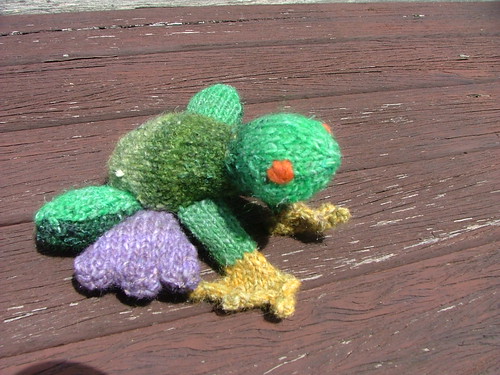 The yellow and purple feet were also from the same ball, so visually it still looks like they more or less belong together.
And since Anna is still a baby I went with the simple embroidery eyes rather then buttons. 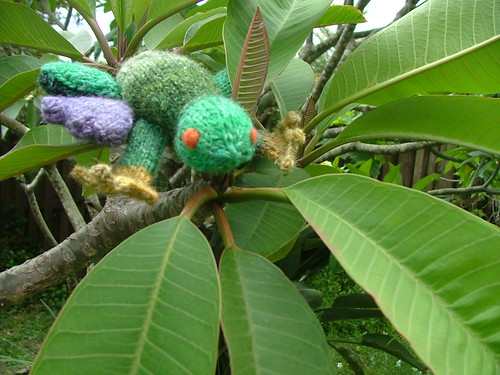 Anna likes it, and will play with it (although she enjoys things that make noise much more, of course) but Jo seems to love it, and as far as a present for a one year old goes, I couldn't be happier with that result.

Other things are on the needles, I'm finally getting around to knitting the second sock from Through The Loops' mystery sock pattern. I suppose I'm just not enamoured with the final design (although it is pretty) and so I've been dragging my feet in getting the second one done.
I brought my thrifted-yarn top with me to work on (but forgot my row counter so I might have to wait on that)
I also brought the yarn and pattern to make another pair of gloves, but I'd have to finish up this sock before I can start on them since I need those needles (motivation to get the sock done!)