As you have probably noticed now, I'm very good at starting projects or ideas and then abandoning them.
101 list comes to mind.. so does keeping track of what books I've read and my thoughts on them, as well as countless others.

This will probably be anothe- No, positive thinking, right?
I spend a lot of time browsing Flickr. It's one of my favorite sites, there's just so much beauty in it.
A lot of people who I keep tabs on have been undertaking a "365 Project" in which they will take a photograph for every day, for a year (365 days, in the end 365 photos)
some go with themes, some don't.

I'm not going to even pretend that I have the discipline to maintain a strict daily posting like I've seen some people do.
But still I'm attracted to things like this.
Soooo, in the great Aussie spirit, I'll give it a go.

I find myself very sensitive to my surroundings, I love beauty and I love discovering beauty in my environment.
I have a hard time, though, seeing the beauty in myself.
I try very hard to be a good person, and I believe that I am one. Every now and again someone will, out of the blue, be Very Kind To Me. But every time it catches me off guard, and I end up feeling a bit horrible because I'm not really sure why I deserve it. Mostly because my world is tinged in blue and gray from The Depression. Indeed, very often I do not like the person staring back at me in the mirror.
SO! 365 Portraits of myself.
Now, I'm going to be flexible, they don't HAVE to be taken one a day, but by the time I'm done I will have three hundred and sixty five photographs of myself. This is mostly to combat the eeyore in my head: "ah, why bother, you're just going to fail anyways. See? Look you're already so many days behind, you might as well just give up."
TAKE THAT PESSIMISTIC VOICE! I can outsmart you.

I'm going to need your help though. See, I DO seem to have this problem with answering to myself. "eeyore" tends to get the better of me if I'm left to my own devices. Do you think you could help keep me motivated? If I stop posting for a while, give me a poke and ask me what's up.. It will help get me out of a rut if I happen to have fallen in one again. It's hard to fall behind when you have a cheering squad on you're side.
Or hell, if this is something that interests you as well why not play along too in your own journal? 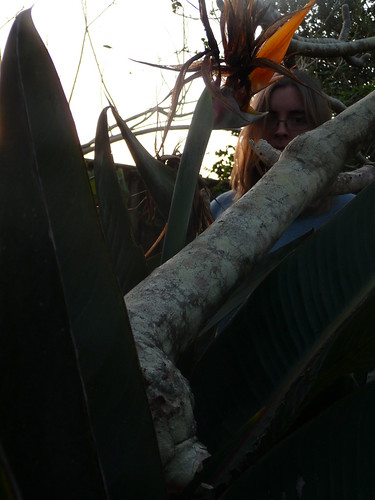 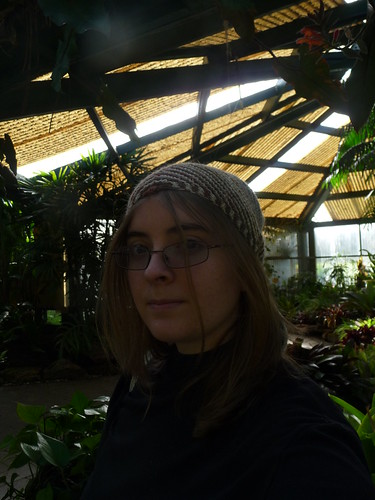 002.
Taken July 14, 2009.
In the greenhouse at the Coffs Harbour Botanical Garden. This was my first time in the greenhouse, as I suppose all previous times I've visited the gardens (which is OFTEN!), it's always been on the weekend and the greenhouse is only open to the public during the weekday (due to theft, people can be so mean).